Never doubt that a small group of thoughtful, committed citizens can change the world; indeed, it's the only thing that ever has.
Margaret Mead

„WORLD DAY of LISTENING“ is a Facebook group initiated during the World Focusing Conference in 2016 in Cambridge. I participated in Greg Madison’s workshop “Focusing and Radical Democratic Change”. At the end of the week the participants in this workshop agreed that we wanted to continue with our ideas. And this is how this group started. The group has grown from originally around 20 to almost 1,000 members in the meantime.

The basic idea is that we believe that only very few people ever experience what it means to really be listened to in a mindful, appreciative and non-judgemental way. The world would be quite a different place if many people experienced – and better still practised – this kind of listening. So we planned a World Day of Listening for 21st October 2016. The feed-back was gigantic. All around the world people gathered to offer this kind of listening in public spaces.

I myself offered a test run in Rome at the Campo di Fiori in September 2016  and was very touched by the response I got. On 21st October I was sitting on a bench on Stuttgart’s Schlossplatz. In spite of the rather chilly temperatures people accepted my offer of free listening (see photo).

I am now equipped with two small fold-up chairs and a sign saying “Free listening” on one and “Ein offenes Ohr” on the other side and offer this form of Social Sculpture spontaneously during my travels. And of course, I will participate in future World Day of Listening activities. 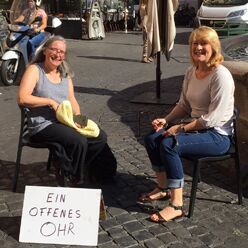 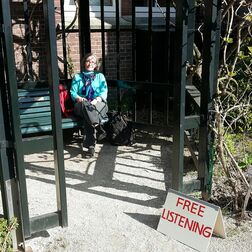 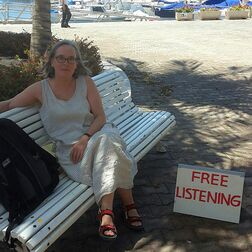 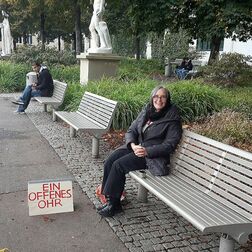 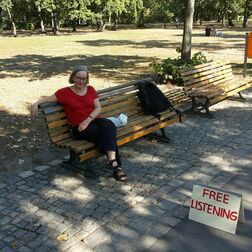 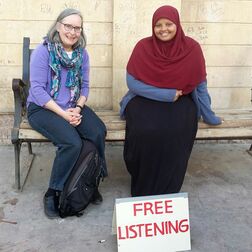